New Images from 'Star Wars: The Rise of Skywalker'

During the past few days, we have been blessed with a couple new images from THE RISE OF SKYWALKER, courtesy of Empire Magazine. The images give us a look at the Knights of Ren and Kylo Ren in some sort of hangar of sorts. Take a look below. The Knights of Ren have been a topic of fan dicussions, ever since their brief appearance in THE FORCE AWAKENS. What could be happening in the image with Kylo Ren and those stormtroopers? We will have to wait and see. EPISODE IX hits thea
12 views0 comments
The Star Wars Guru

I am late sharing the news about the recent special look at the upcoming conclusion to the Skywalker Saga, THE RISE OF SKYWALKER. You can watch the footage below, and boy oh boy does it bring up so many questions!!!! Along with the new EPISODE IX footage, we also got a cool poster featuring Rey, Kylo Ren, and Darth Sidious! THE RISE OF SKYWALKER will hit theaters on December 20, 2019. Any predictions on what will happen in this epic conclusion? Let me know in the comments bel
3 views0 comments
The Star Wars Guru

I know I am late, but Lucasfilm released the trailer for season two of STAR WARS RESISTANCE. The trailer touts this as the "epic conclusion" to the series. I'm glad the show is ending on its own, and not being cancelled. It is always a joy to watch a series come to its actual conclusion and not just end because it was pulled from the network's lineup. The trailer is beautiful, I must admit. We see our main characters and film favorites like Kylo Ren and Captain Phasma. Check
4 views0 comments
The Star Wars Guru

A Look Ahead: 'Age of Resistance'

'The Rise of Skywalker' Images Revealed

Recently, Lucasfilm released several behind the scene photographs from THE RISE OF SKYWALKER. The photos were revealed via a Vanity Fair exclusive. You can take a look at some of the photos (Photos taken by Annie Leibovitz) below. For more images from the Vanity Fair exclusive, check out their cover story here and visit the official Star Wars website here. I am most excited from the confirmation that the Knights of Ren will be in THE RISE OF SKYWALKER. EPISODE IX comes to a t
7 views0 comments
The Star Wars Guru

Back in July, Lucasfilm and Marvel announced a new series set during the Prequel Trilogy, Original Trilogy, and Sequel Trilogy. I posted an article about that announcement, which you can read by clicking here. The series will be written in three parts: AGE OF REPUBLIC by Jody Houser; AGE OF REBELLION by Greg Pak; AGE OF RESISTANCE by Tom Taylor. I have faith that Marvel will continue its streak of making cinematic worthy comic books for the Star Wars franchise. You can check
2 views0 comments
The Star Wars Guru

Reminder: 'Star Wars: Women of the Galaxy' Out October 30th

Last week, Lucasfilm released a sneak peek at the upcoming series STAR WARS RESISTANCE. I've said it, and I'll say it again, this show looks absolutely gorgeous. I can't wait for October 7th to get here! Just under a week away. Check out the sneak peek below. STAR WARS RESISTANCE premieres October 7th, 2018 on the Disney Channel. Make sure to tune in! #News #SequelTrilogyEra #StarWarsResistance
5 views0 comments
The Star Wars Guru

Lucasfilm released a behind the scenes video for the upcoming television series STAR WARS RESISTANCE. In this video, we get to meet Team Fireball, the main cast of the show. Check out the video below. I must admit, I really am digging this animation style. October 7, 2018 can not get here soon enough. #BehindtheScenes #News #SequelTrilogyEra #StarWarsResistance
7 views0 comments
The Star Wars Guru

Today, Lucasfilm began filming for the final chapter in the Skywalker Saga. J.J. Abrams shared a behind the scenes picture on his Twitter, which you can see below. J.J. Abrams included the caption, "Bittersweet starting this next chapter without Carrie, but thanks to an extraordinary cast and crew, we are ready to go. Grateful for @rianjohnson and special thanks to George Lucas for creating this incredible world and beginning a story of which we are lucky to be a part. #IX" E
9 views0 comments
The Star Wars Guru

Some EPISODE IX casting news has been released by Lucasfilm! We still have over a year before the final chapter in the Sequel Trilogy hits theaters, but at least this news can keep us distracted for a few days. Returning from the previous Sequel Trilogy Episodes are Daisy Ridley, John Boyega, Adam Driver, Oscar Isaac, Joonas Suotamo, Domhnall Gleeson, Kelly Marie Tran, Lupita, Nyong’o, and Billie Lourd. Two new cast members for EPISODE IX are Naomi Ackie and Richard E. Grant.
24 views0 comments
The Star Wars Guru

How the 'Sequel Trilogy' Should Handle the New Jedi Order

I remember back in 2012, when Lucasfilm announced they were making new Star Wars movies, all I could think about was how I wanted to see the Jedi in full force in Lucasfilm's new Star Wars SEQUEL TRILOGY. I wanted them to be just like they were in the STAR WARS PREQUELS & STAR WARS: THE CLONE WARS. Then it dawned on me, that's not the Jedi way. The PREQUEL TRILOGY and THE CLONE WARS showed us the Jedi in a time period where they are long removed from their true purpose. It wa
55 views0 comments
The Star Wars Guru

Welcome to another 'Guru Review'. It has been several months since my last review. I apologize, but I do have some good news. I now plan on reviewing every piece of Star Wars canon. Of course, this will be a long series. Hopefully, you will be here for the ride. In this edition of GURU REVIEW, I will share my thoughts on the Marvel comic STAR WARS: DJ: MOST WANTED. This is a one-shot comic written by Ben Acker and Ben Blacker, with art by Kev Walker. STAR WARS: DJ: MOST WANTE
40 views0 comments
The Star Wars Guru

Lucasfilm released a trailer for the upcoming book THE MOVIEMAKING MAGIC OF STAR WARS: CREATURES & ALIENS. The book is authored by Mark Salisbury, and takes fans on a journey from the Original Trilogy to the present films. Highlighting the creatures and aliens that have graced the big screen. Check out the trailer below. You can pre-order the book here. Will you be adding this to your collection? Let me know in the comments. May the Force be with you. #BehindtheScenes #AStarW
14 views0 comments
The Star Wars Guru

Today, Lucasfilm has released seven new episodes of the animated micro-series STAR WARS FORCES OF DESTINY. They were uploaded to the official Disney YouTube channel, but you can watch them all below. What an amazing treat for International Star Wars Day! Let me know your favorite episode, from STAR WARS FORCES OF DESTINY, in the comments below. May the 4th be with you! #ForcesofDestiny #OriginalTrilogyEra #SequelTrilogyEra #News #PrequelTrilogyEra
14 views0 comments
The Star Wars Guru

Lucasfilm has officially announced on the Star Wars website a new animated series coming to Disney XD this Fall. The series will be titled STAR WARS RESISTANCE, and will be set prior to THE FORCE AWAKENS. Created by Dave Filoni, STAR WARS RESISTANCE will be about a young Resistance pilot named Kazuda Xiono. There will be familiar character in the show, like Poe Dameron and Captain Phasma. Both of which will be voiced by the actors who play them in the Sequel Trilogy. There ar
77 views0 comments
The Star Wars Guru

Cover for 'Jedi the Last' Revealed

Lucasfilm has revealed the cover for the William Shakespeare inspired version of EPISODE VIII, "Jedi the Last." The book is written by Ian Doescher with the cover art by Nicolas Delort. Check out the cover below. "Jedi the Last" hits bookshelves July 10, 2018. Click here for Lucasfilm's reveal, which includes an interview with cover artist Nicolas Delort. #StarWarsBooks #SequelTrilogyEra #News
15 views0 comments
The Star Wars Guru

Lucasfilm has released eight new episodes for season two of the animated series STAR WARS FORCES OF DESTINY. This new season sees Mark Hamill reprising his role as Luke Skywalker, and Kelly Marie Tran reprising her role as Rose Tico. Check out all eight episodes below. I'm glad to see new episodes of FORCES OF DESTINY. Have a new favorite episode? Let me know in the comments below. May the Force be with you. #ForcesofDestiny #AStarWarsStory #SequelTrilogyEra #OriginalTrilogyE
17 views0 comments
The Star Wars Guru

Lucasfilm has released a trailer for the in-home release of STAR WARS EPISODE VIII. The film will be available digitally on March 13, 2018, with the Blu-Ray released on March 27, 2018. Watch the trailer below. I look forward to adding THE LAST JEDI to my steelbook collection. May the Force be with you. #StarWarsMovies #SequelTrilogyEra #News
24 views0 comments 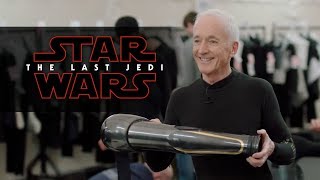 Droid Training for 'The Last Jedi'